Overtaking at a Bend is a Dangerous Manoeuvre 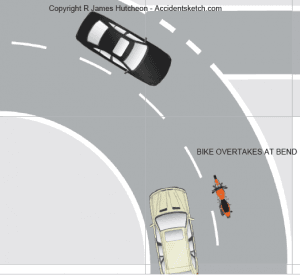 Motorbike Overtakes Car at a Bend

Whilst motorbike accident solicitors are often critical of a motorist who fails to appreciate that a motorcyclist has just as much a right to be on the road than the motoring counter-part there are times when a motorcyclist does act recklessly or carelessly.

The case for this example is a dangerous manoeuvre where thee motorcyclist overtakes a car on a bend. This is in breach of the Highway Code, not just for motorcyclists but also for motorists. In fact this manoeuvre is similar to the example where the motorbike rider swerves to avoid a motorist who crosses a lane divider.

5 of the Most Dangerous Types of Bikes for Accidents
How Is Accident Compensation Calculated?
Travelling Safely in Winter
The Rise of Electric Scooters & What You Should Know
4 Most Common Bike Accidents – Voted by Solicitors