Is It Safe for Kids to Ride Bikes?

Home > Article > Is It Safe for Kids to Ride Bikes? 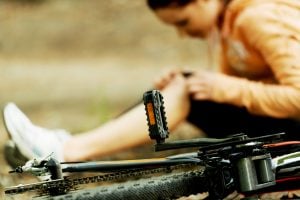 The number of pedal bike deaths is higher at a level of 14% for urban roads compared to 6% for rural roads meaning cyclists are more at risk in urban areas according to the Department for Transport.

Headway, a leading UK brain injury association, report there were 18,477 pedal cycling casualties reported in 2016 a number which provisional studies suggest is increasing yearly. Around 20% percent of all cycle accidents result in the cyclist being killed or seriously injured, totalling around 6% of all road deaths.

The most common injuries as a result of cycle accidents are Head, Arm and Leg injuries which all vary in severity.

Head Injuries as a Result of a Cycle Accident

Head injuries from a cycle accident range in severity but a common variable is if a cyclist wears a head injury the injury is usually less severe. Around 40% of all cyclists admitted to hospital have suffered head injuries according to CAPT. According to Bicycle Universe, only 17% of people fatally injured were wearing helmets, whereas 54% were not wearing helmets and helmet use was unknown for 29%.

Traumatic brain injuries are common injuries when a cycle incidence occurs and the cyclist is not wearing a helmet as eternal forces are more likely to jolt the brain. Effects of a brain injury can be wide ranging dependent on the variable but can lead to unconsciousness, seizures, repeated vomiting, blood or clear fluid coming from the ears of nose as stated by the NHS. Brain injuries often lead to long term health issues and could even have fatal consequences.

Compensation for head and brain injuries including loss of sight and hearing could range from £1000 to £326,700.

Children and young adults are commonly involved in cycle accidents as a result of doing stunts, going fast, losing control, inexperience or playing in the road, such as half wheeling. According to Cycling Up Hill, a common cause of cycle accidents are child cyclists playing or riding to fast, hence the police found that in the case of child cyclists being involved in accidents it was mostly due to the young cyclist failing to take care.  A reason contributing to the increased number of child related cycle incidents are commonly due to a lack of knowledge of the Highway Code.

Cycling injuries among children are not solely on the road, many young cyclists injure themselves by simply bumping into things or simply falling. The Child Accident Prevention Trust states that ‘over 2000 children are taken to A&E each year after a cycling accident at home, and a further 21,000 after accidents in places like parks and playgrounds’. The injuries from such accidents vary but the chances of a child suffering a serious head injury such as traumatic brain damage, increase if a child isn’t wearing a helmet. The CAPT also suggest that at least 10% of all cycle accident related deaths could have been prevented if the cyclist wore a helmet.

A report by Nixon, Clacher, Pearn and Corcoran for the British Medical Journal, suggest that bicycle accidents on the roads occur most commonly to boys aged between 12 and 14 years on a straight road at ‘mid-block’ (middle of the road) between 3 and 5pm often in clear weather conditions and daylight.

A study by the Murdoch Children’s Research Institute  in Australia found that amongst children cycle accidents where the most common cause of injury with 16% of their sample group being injured by bike riding. Rugby injuries came closely behind with 13% of the sample group being injured while playing. Of the cycle injuries, only 4% where considered serious and led to long term consequences.  Overall, in the period of 2011 to 2014 the number of sport related injuries was 3177 and 45 of those where serious enough to cause traumatic brain injuries. There were no significant head injuries in the study as a result of children playing hockey or cricket.

Many claims are expressed by the parents as their ‘child knocked of bike’ which is the subject of more detail in that link. Many children are inexperienced and when presented with danger will often panic and can easily fall or will be knocked off their bike causing injury, trauma and upset.

Contact the experts in all manner of cycle accident compensation claims.  We specialise in child injuries so please contact us for help, support and advice by clicking; cycle accident claims.

The Latest Safety Equipment to Help You Avoid a Fatal Bike Accident
Is Driving a Motorcycle Worth the Risk?
5 of the Most Dangerous Types of Bikes for Accidents
How Is Accident Compensation Calculated?
Travelling Safely in Winter